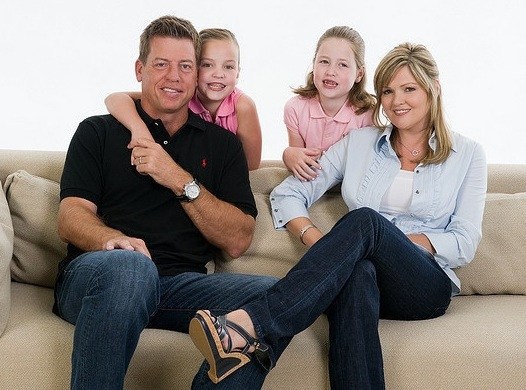 Unknown to mainstream news, Rhonda Worthey aka Rhonda Aikman caught under the media radar only after marrying Troy Aikman.

One of the members of Triplets of Dallas Cowboys, the former quarterback married Rhonda when she was in her late twenties. The ex-couple have two daughters Ashley and Alexa Marie Aikman. She also has a daughter named Rachel from her previous relationship

They separated in January 2011 after 11 years of marriage.

Although some news outlets claimed her birth year in 1969, her real birth is confirmed to be May 2, 1970. She holds a degree in Public Relations that led to her position as a publicist in Dallas Cowboys.

Rhonda Worthey is a key figure today. However, this wasn’t the case before the 90s.

She only garnered media attention after she started her romantic relationship with Troy Aikman in 1998. Rhonda met the three times super bowl winner, Troy Aikman during her tenure as the publicist in Dallas Cowboys.

After dating for just 18 months, Rhonda and Troy got married on 8th April 2000. The wedding ceremony was hosted in Plano, Texas. They made their home in Dallas.

Rhonda and Troy have two daughters together, Jordan Ashley Aikman (born August 24, 2001), and Alexa Marie Aikman (born July 30, 2002). She also has a daughter named Rachel from her previous partner who is unknown to sources. The duo called off their marriage on January 25, 2011. And the divorce was finalized on April 21, 2011, after 11 years of marriage.

From stars like Brad Pitt and Angelina Jolie and many Hollywood celebs, the couple tried their best to console their relationship that was of no avail eventually. This is what Troy said about his marriage failure:

“It has been a difficult decision for us, but after ten years of marriage we have decided to separate.”

Rhonda holds the custody of their children. After their separation, Rhonda has been single till this date whereas the legend of Dallas Cowboys got engaged to fashion retailer Catherine “Capa” Mooty on June 2, 2017.

TMZ and Dallas Morning News broke the story of separation

Aikman and Rhonda tried to keep their divorce as private as possible. However, TMZ was quick to pounce on the separation news.

TMZ revealed that the duo started to split their assets before 2 months of their divorce. The validation of news was eventually confirmed through Dallas Morning Monday News.

She eventually closed their divorce preceding by bagging $1.5 million home along with $1.75 million for child support as settlement fees.

In August 2012 just after a year of her divorce, Rhonda was arrested and charged with violating public well-being by public intoxication in a high school, Murphy, Texas.

According to TMZ, during the scene, police officers found two water bottles filled with a liquid that smelled like booze, see video.

“Do you know what this is gonna do to him? Troy?”

She was charged and instantly pleaded “no contest” in exchange for 30 days probation period.

According to her Rhonda’s Lawyer Larry Friedman

“It happened when she was waiting for a friend, to come guide her to her destination. She was not wrong and did not break any laws. She is sorry about all the thing and intends to continue to dedicate her time to helping people in need in North Texas”. “Like most of us have been from time to time, Rhonda was lost and gotten bad directions”.

He further stated to TMZ

“This is a good result for everybody and puts the matter to bed once and for all,”

In March 2012, speculations were made by Reality Tea about Rhonda Worthey featuring in Real Housewives of Dallas. The show continued to postpone until 2016 when it finally aired. Too much of disappointment, Rhonda was nowhere to see.

What’s her net worth

Although Rhonda doesn’t make much after her retirement as Publicist and divorce aftermath, she still racks up to 10 million according to insiders. She still has the home obtained during divorce settlement and probably has made lethal investments from her settlement money.

She now keeps herself away from media and hardly anyone knows about her whereabouts. You can’t even find her on social media.

Troy Aikman on being Gay Rumor

The Ace of Fox Sports commentary, Troy was always thrown into the speculations of being Gay.

Although the rumor from Skip Bayless had a lot of push, the wind was eventually cleared after his marriage with Rhonda. It’s really hard to comment on someone’s sexual status when he has two children to prove otherwise.