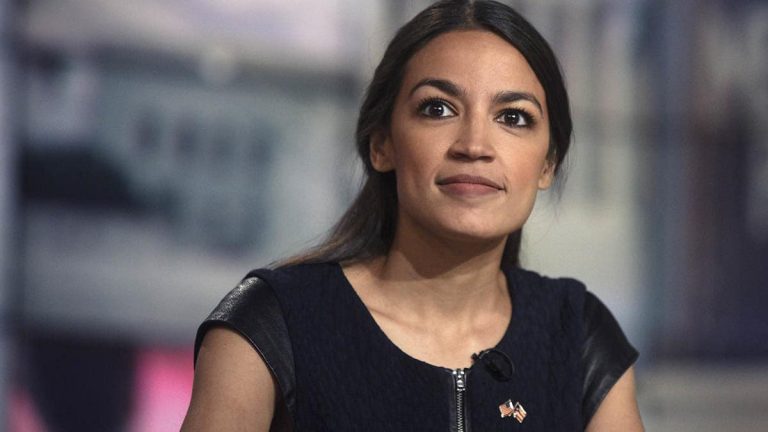 Alexandria Ocasio-Cortez is an American Democratic Socialist who made the news after comprehensively beating one of the party’s most senior congressman Joe Crowley in a stunning New York election victory.

On November 6, 2018, she was elected as the U.S. Representative for New York’s 14th congressional district. In the history of US, she will be the youngest female candidate ever to be elected to Congress. A bartender struggling to meet the month ends pulling of the victory had certainly generated shock-waves among democratic parties.

Born on October 13, 1989, in the beautiful city of New York, Ocasio-Cortez made through headlines with her dramatic upset over Crowley. Raised by working-class Puerto Rican parents, Alexandria had a hard time meeting the ends during her childhood.

Up to age 5, she was raised in an apartment in the neighborhood of Parkchester. After that, they shifted to Yorktown Heights, a suburb in Westchester County.

Ocasio-Cortez joined Yorktown High school as she traveled between the borough and Yorktown, 30 miles north, for school. During her high school years, she won multiple prizes including the second prize in the International Science and Engineering Fair. She also showed her public speaking qualities during her participation in the National Hispanic Institute’s Lorenzo de Zavala (LDZ) Youth legislative session where she also became the LDZ secretary.

In 2008, her father died suddenly at 48 years old due to lung cancer. During that time she was a sophomore at Boston University and worked for the late Senator Ted Kennedy. In 2011, she graduated with a degree in economics and international relations from Boston University.

Before moving to New York, Alexandria’s family were in Puerto Rico where her grandfather lived in a nursing home. Unfortunately, her grandfather died due to the Hurricane Maria which led her parents to shift to the US for a better life.

In a video campaign, Ocasio-Cortez said, “I wasn’t born to a wealthy or powerful family… mother from Puerto Rico, dad from the South Bronx. She further eluded that her parents worked hard to move her family to Yorktown Heights when she was five so she could attend a better public school. After her father’s death in 2008 due to lung cancer, she had to work two-day jobs at “18 hours shifts” as a waitress and bartender.

In a long rally of counterblow Tweets with John Cardillo, she tweeted “My mom scrubbed toilets so I could live here & I grew up seeing how the zip code one is born in determines much of their opportunity.”

Ocasio-Cortez credits her Catholic upbringings for her life decisions and its impacts on her campaign for criminal justice reform. In 2018, the activist group “Jews for Racial & Economic Justice” held a Hanukkah party where she announced that her family has Sephardic Jewish ancestry though they did not practice the faith.

Before blasting her way to politics, Alexandria Ocasio-Cortez worked as a lead educational strategist at GAGE, Inc. She was also an educator at a non-profit National Hispanic Institute. In 2016, she worked as an organizer for Bernie Sanders in his 2016 presidential campaign.

She was inspired to begin to work for her own community after she visited North Dakota, where she saw people “putting their whole lives and everything that they had on the line for the protection of their community”.

After so much struggle she won the Democratic primary race for the U.S. and became the Representative for New York’s 14th congressional district. Her victory is one of the biggest parts of a larger story of a Democratic party in revolt.

At the age of 28, Alexandria Ocasio-Cortez was one of the youngest nominees for Congress. She was the first Democrat to challenge Crowley to a primary race since 2004.

If elected, she would become the youngest woman ever to be elected at the U.S. House of Representatives. That distinction was previously held by New York Republican Elise Stefanik, who was elected at the age 30 in 2014. Ocasio-Cortez, however, will be 29 at the start of the 116th Congress making her the youngest among the candidates.

The people of the Bronx and Queens, and countless supporters across the country, elected us on a clear mandate to fight for economic + social justice in the United States of America.

And that is what we will do. pic.twitter.com/kMYu804v4r

Ocasio-Cortez starred in many campaigns including Medicare for all, a federal jobs guarantee, tuition-free public college, and the abolition of U.S. Immigration and Customs Enforcement. She also appeared on a protest at an ICE child detention center in Tornillo, Texas just two days before the primary election. Her powerful video campaign struck a sensitive button that stated: “Women like me aren’t supposed to run for office.”

That campaign went viral and laid a perfect foundation for her victory. During her victory speech and for cheering supporters on Tuesday she told that “This is not an end, this is the beginning”.

Talking about her Net worth, the information hasn’t been totally disclosed. All we know is that the member of Congress has something like five times the net worth of the typical American household in an average.

That’s why instead of talking about her bank account, it will be fruitful to talk about how much her peers in Congress have in theirs.

When it comes to social media, there aren’t many political stars that are shining as brightly as Alexandria Ocasio-Cortez. She is most active in Twitter but she isn’t far behind in Facebook and Instagram. She often finds herself defending a flurry of tweets with her witty replies.