Miss Florida Laura Rutledge is an American reporter and host. She has served for CNN international, ESPN and SEC network. She had worked in the markets of Tampa and San Diego for Fox Network prior to working for SEC Network. She has also won Miss Florida in 2012. 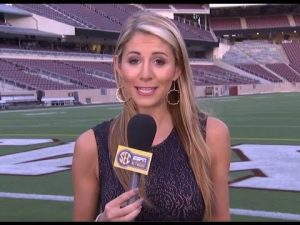 She is one of the most anticipated faces in the SEC. Laura Rutledge was born as Laura McKeeman on October 2, 1988. She is the wife of Boston Red Sox baseball player, Josh Rutledge and she started using his surname as hers and is known as Laura Rutledge.

Laura Rutledge has not revealed information regarding her early life. However, it is known that she is the daughter of Deborah McKeeman. She was born and raised in St. Petersburg, Florida. She is an American citizen and belongs to white ethnicity. She has graduated from the University of Florida majoring in broadcast journalism.

Since her childhood, Laura Rutledge was interested in dressing up and doing make ups and posing as a model. The childhood interest was later developed as a challenge to participate in the beauty pageant. She is a gorgeous lady with the height of five feet and eight inches. She blessed with slim toned body shape giving her a perfect hourglass shaped body. In 2012, she finally made a decision to compete in Miss Florida which came out as the wise decision. She won the title and the Miss Florida crown on July 7, 2012, opening her door to prestigious Miss America. In 2013, she competed for the Miss America 2013.

Since she is the graduate of broadcast journalism and also being a beauty queen, finding her way in media journalism was not that hectic in her case. Her fame was already well known and along with her knowledge stood as the perfect combination to land on any job.

She worked for Fox Sports as a sideline reporter covering the news from Tampa Bay Rays games and San Diego Padres games. She also covered for the Fox College Sports of the NCPA’s 2012 National Paintball Championship at Lakeland, Florida.

Trying to convince my bosses to let me wear this get up on TV tonight. Tune in to @SECNetwork for #SECNow to see if I win. #CasualTuesday pic.twitter.com/pU2p0r8bnc

After a while she joined in ESPN and adding to her responsibilities, she joined SEC network in 2014. With SEC, she is reporting to the SEC Nation from the on-location throughout the Southeast of United States on tailgating.

She also covered a national championship game what she considers as one of her biggest achievements.

Never imagined I could even be a small part of covering a National Championship game. One of the best parts: watching my friends shine. pic.twitter.com/jMNqiD6DGh

The CNN sensation has been married to her long time boyfriend Josh Rutledge who is a professional baseball player playing in the Major Baseball League from Boston Red Sox. Although Laura keeps her private life a secret, it’s said that she had been dating Josh for over 5 years prior to tying the knot.  They got married in 2013. However the exact date has been kept secret from the general audience. The couple is regarded as the blessed one for they got to marry the one they are madly in love with. Josh is her boyfriend turned husband. The couple is very happy and spending a blissful marital life. The couple has not disclosed any information regarding their love life or marital life. However, you can find their wedding pictures like these from her instagram:

There is no news of the couple have any children. However, in one of the photographs, a bump was seen on Laura. However, we haven’t received any sort of news about she being pregnant. Hopefully, we can hear the news of this couple being parents in no time sooner.

Laura in the internet

Your name is your identity but sometimes it's so much more. Two special families connected by a name and softball. https://t.co/h9iZYgkId8

Laura Rutledge is active on the social sites. She is active on her Twitter and Instagram accounts. The videos of her wearing the short skirts have swept the internet as she looks undeniably hot and sexy.  A very short biography of her is available on Wikipedia and other internet sites that aid to learning about her.

In recent announcement, Laura was named as the host of SEC Nation. She had joined ESP’s coverage of the Southeastern Conference in 2014 as a reporter on SEC Network. She normally covers sports like football, basketball, and baseball in her columns. Recently she was in the news for her line of question that made kentucky fans angry.